The Case Against A Recession and M&A Downturn

Posted on August 9, 2022 By Benchmark International 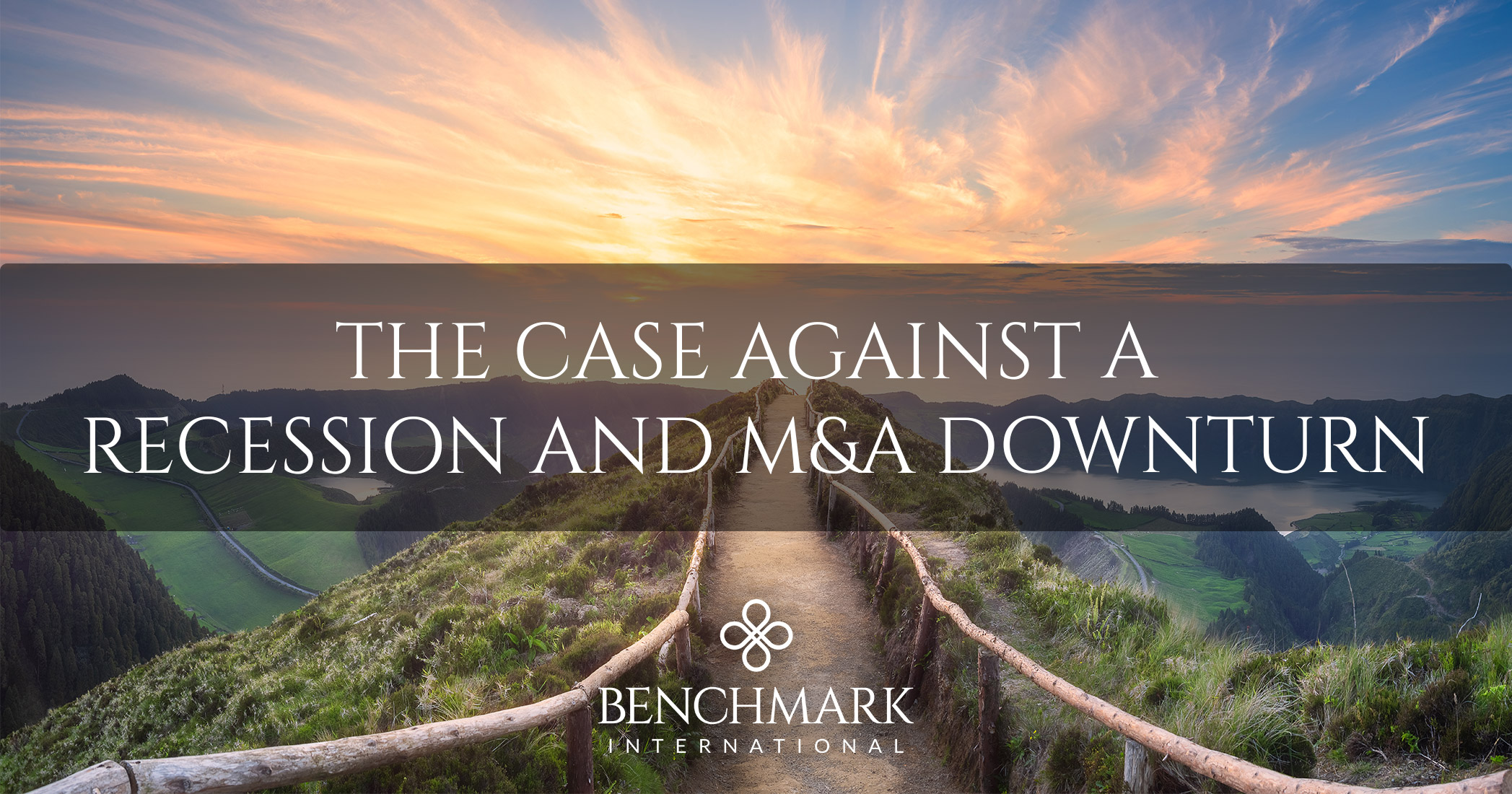 The U.S. economy has weathered more than two years of unique disruptions due to the COVID-19 pandemic. In addition to the ongoing supply chain problems, Americans now have to deal with the impacts of elevated inflation, higher interest rates, and sanctions because of Russia’s war on Ukraine. These issues are combined with other economic warning signs to raise concerns that the economy is on the verge of a recession.

However, while there could be a higher risk of recession, economists say there is no reason to panic. Over the past century, recessions have been a fairly common occurrence and have created quality opportunities for investors and acquirers.

What Exactly Is a Recession?
While there is not a technical and universal definition for an economic recession, economic experts usually define it as two consecutive quarters of negative gross domestic product (GDP).

Additionally, the National Bureau of Economic Research (NBER), the organization officially in charge of identifying U.S. recessions, has a rather vague definition of a recession. The NBER defines a recession as “a significant decline in economic activity that is spread across the economy and that lasts more than a few months.”

An economic slowdown has to be significant and sustained in order to be considered a recession. The downturn seen during the COVID-19 pandemic lasted only two months, so it technically was not a recession. And right now, companies are still hiring, and consumers are still spending. The job growth in the U.S. does not coincide with a recession, as 372,00 jobs were added in June, far exceeding previous estimates. And financial analysts expect S&P 500 companies to see earnings and revenue both grow.

Reasons for Recession Concerns
So, if analysts are not panicking, why does everyone seem to be worried about a recession?

Making the Case Against Recession
Even amid all the warning signs, right now the economy is just too healthy to be considered in a recession. Job growth is seeing its largest gains in almost 40 years, which makes it pretty difficult to say there is a recession. The labor market simply does not indicate that a recession is imminent.

However, we have to keep an eye on consumer behavior. Consumers account for nearly 70% of the overall U.S. economy. Consumer sentiment is at very low levels between high gas prices, rising interest rates, and all the other impacts of inflation. Retail sales reports will be an important signal of what is to come for the economy.

No Reason to Panic
Even if the U.S. falls into a recession during the next year, there is still no reason to panic. Why?

Recessions typically do not last very long. Since WWII, the average length of a U.S. recession has been only 11.1 months. The COVID-19 recession only endured for two months.

Recessions are also more common than most people realize. Also, since WWII, the U.S. has seen one recession every five years or so.

While recessions usually result in job losses and other financial problems for average Americans, they are also usually great M&A opportunities for investors and acquirers. And some stocks even perform well during recessions.

The good news is that if a recession does occur, it is likely to be tamer and less damaging to company earnings in comparison to other recent downturns. This is because of several factors.

First of all, a credit-driven recession is much more damaging to corporate earnings than an inflation-driven recession. The dot-com bust of 2001 and the 2008 recession were both credit driven as debt-related excesses built up, and the economy took nearly a decade to absorb them. Right now, we are looking at excess liquidity instead of debt. This difference is significant for any investor.

Another reason not to panic is that fundamentals are stronger. Several economic factors predict a less severe recession, if one even happens at all.

Historical Federal Funds Rates
A look back in time shows us the correlation between the Fed rates and periods of recession. The shaded areas indicate recessionary periods.

Record Highs in Private Equity Fundraising
PE firms are currently in what PitchBook analysts call “the most crowded fundraising market in history.” In the first six months of 2022, PE firms raised $176 billion across 191 funds. This feverish pace could surpass last year’s total fund value of nearly $340 billion across 577 funds.

In addition to the above, Benchmark International is on pace to record its highest ever number of transactions for y/e 2022. Drew Deal, Managing Director, states, “We continue to witness unprecedented demand from both strategic and financial acquirers across all notable sectors and geographies irrespective of the negative rhetoric being published across most media outlets in recent news cycles. In just the first seven months, we are confident 2022 will be a record year for Benchmark International across all of our global offices. Looking ahead, we continue to see no noticeable slowdown in demand for quality businesses or changes to acquisition appetites in the mid-market. While we understand that there will be an eventual slowdown, the majority of the buyers we are speaking with daily are taking a long-term view in their acquisition strategy and are less concerned with near-term fluctuations. Couple this with the significant levels of cash sitting on acquirers’ balance sheets and a favorable interest rate environment, historically speaking, and we are quite bullish on our ability to deliver maximum value for our clients for the foreseeable future. Additionally, PE continues to outperform nearly all other major asset classes, placing them in prime position as they continue their fund-raising efforts.”

Benchmark International: The Subject Matter Experts
As global M&A specialists, Benchmark International is acutely placed to understand the current market dynamics and acquisition appetites of investors. Sam Smoot, Managing Director for Benchmark, stated, “We speak to hundreds of buyers and investors daily, and we garner their investment strategy for the coming years. The majority of our acquirers are focused on a five-to-seven-year investment strategy. They factor in current, pending, and future market shifts alongside political implications, most notably the presidential election in 2024. Some hold the view that there will be a shift to a Republican administration and, as such, expect a surge in the economy post-election, which is supported by historic events. Their investment/acquisition strategy is more concerned with looking ahead over the next few years. Many of our acquirers and investors believe any recession will be fairly shallow, any impact will be swift, and there will be a short correction in the market.” This thinking is supported by the latest figures released by Pitchbook.