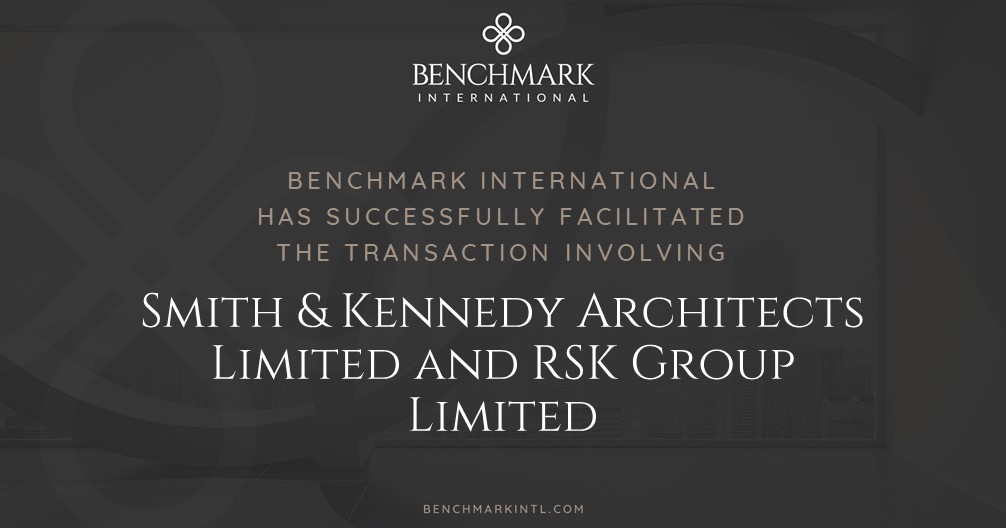 Benchmark International is pleased to announce the acquisition of Dublin-based Smith & Kennedy Architects by RSK Group.

Smith & Kennedy Architects is an award-winning architectural practice specialising in contemporary design for national and international clients. The company was established in 1999 by Joe Kennedy, following his acquisition of a pre-existing firm, E.N. Smith & Partners, which enjoyed a long history in Dublin, having been established in the early 1960s with a specialisation in church and education projects. Following the change in ownership, Joe Kennedy began diversifying the firm’s practice, offering services in the design of offices, schools, houses and hotels.

Following the acquisition, Mr Kennedy will continue to lead the business as it joins RSK's European division under the direction of Nigel Board.

RSK is an integrated environmental, engineering and technical services business, operating in over 35 countries, with more than 6,000 employees and a proforma annual turnover in excess of £500m. It is currently actively investing in Europe, the Middle East, Africa and Asia Pacific, and has an active client base of over 8,000 organisations spread across these regions.

The acquisition of Smith & Kennedy Architects represents one of four acquisitions this financial year by RSK as it continues its vigorous buy-and-build strategy, and the third acquisition conducted via Benchmark International over the past two years, which included the acquisition of the group of Pellings companies and Ecologia Environmental Solutions.

END_OF_DOCUMENT_TOKEN_TO_BE_REPLACED

Benchmark International is pleased to announce the successful closing of DC Capital Partners’ investment in PBK Architects, Inc., and its subsidiaries. As the 23rd largest US-based architecture firm, PBK, based in Houston, Texas, and its subsidiaries in California, Beijing, Shenzhen, and Hong Kong employ over 500 architects, engineers, and related professionals.

“We are pleased that we were able to introduce PBK’s owners to the right partner, one who not only recognized the value and potential in the business but also saw the wisdom of leaving its management, best-practices, and award-winning culture in place; our clients' three most important criterion for taking this step,” said Dara Shareef, one of Benchmark International’s two Managing Directors on the transaction.

In addition to its Top 25 status, in 2019 PBK was ranked as the “#1 Education Design Firm” by Engineering News-Record (“ENR”), widely regarded as the engineering and design industry’s premier publication. Specializing in K-12 projects and, in particular, large public high schools, PBK has long been the go-to firm for sustainable design and next-gen integrations in particular. The company also focuses on two related building types - higher education and sports facilities.

DC Capital Partners was familiar with PBK’s government focus, already having made similar investments in architecture firms, AMA and Pond & Co., both of whom work predominantly with US federal government clients.  “Moving into the local government market was not a big step for DC Capital but one they appear to have not explored previously. When Benchmark International first contacted them with the opportunity, the timing was not right given their other ongoing projects at that point. Benchmark’s diligence and perseverance in circling back proved to be a key factor in achieving this successful result,” said Benchmark International Associate Jesse Crawford-Lang.

“In our industry representing government contractors is often seen as a niche specialty. Though we are sector agnostic, we end up closing deals for more government contractors each year than do most boutiques specializing in the field. A great business is a great business and PBK is a great business,” said, Clinton Johnston Benchmark International’s other Managing Director on the transaction.  This transaction follows closely on the heels of 11 other Benchmark International deals closed in the AEC space in the first half of 2020.

Closing a deal in the midst of COVID, particularly one with the unique international implication present here, was not without challenges, however. The deal was agreed in principle just before lockdowns began across the country. Despite the turmoil in the markets, both sides were able to hold up their end of the originally agreed bargain though not without a bit of mutually beneficial maneuvering. PBK Founder and Executive Chairman Dan Boggio commented, “Benchmark, along with our legal team at Nelson Mullins and our accounting team at Weaver, just kept plugging away no matter what was going on outside the deal. The number of issues that needed to be addressed, negotiated, and implemented in a deal like this was apparently endless. The ways that we and DC Capital had to come together to address some unprecedented events precipitated by the pandemic and the creative solutions our team generated were absolutely amazing.  My partners and I are so glad that we had the opportunity to work with this great team. I don’t know that this would have gotten done, even in regular times much less the first half of 2020, without them.”

PBK’s efforts were led internally by CO-CEO and COO Chris Cunico. He added, “We really appreciated the way Benchmark led us through this process. All the decisions were ours to make. They continuously provided the data, inputs, and experienced insights that set us up to make the best possible decisions throughout the relationship. They were patient with us when we wanted to move slowly and led the charge whenever we wanted to move ahead aggressively.”

DC Capital was assisted on the transaction by Arnold & Porter, Ernst & Young, and Aon Advisory. “When DC Capital comes to town, they bring the big guns. It was a pleasure to stand toe-to-toe as adversaries to negotiate and structure the best deal possible for both sides while never compromising on our clients’ list of non-negotiable issues. We like to test our mettle, and that’s what happened here.  In the end, this is the deal we were asked to get for our clients, and we are happy to have delivered for all 16 of them,” added Benchmark International Associate Director Deidre Ryan.

END_OF_DOCUMENT_TOKEN_TO_BE_REPLACED 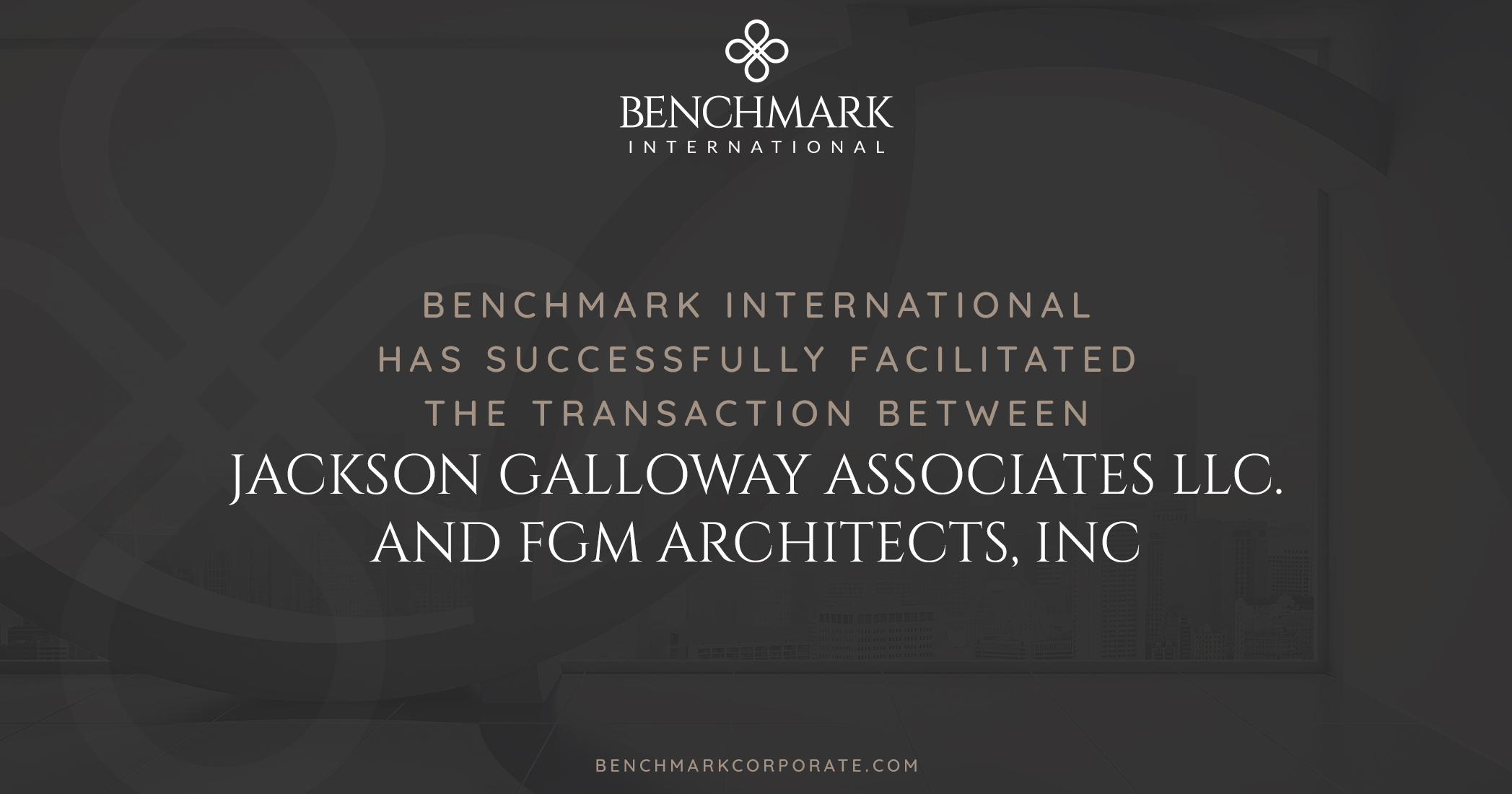 Jackson Galloway Associates, LLC is a highly-reputable firm that provides full-service architecture and interior design for the Texas market.  The majority of their clients are churches, public and private schools, athletic facilities and non-profit organizations in the Texas market with a high focus in Austin, one of the fastest growing cities in the country.

FGM Architects is a professional service firm with an emphasis on design and service.  Since 1945, FGM Architects has specialized in the planning and design of environments for PK-12 Education, High Education, Municipal and Federal clients. They offer a unique combination of experience, talent and a collaborative design process.

According to John Jackson, AIA, now Managing Director of the Austin Office of Jackson Galloway FGM Architects “'Our transition was assisted by the personal and professional team at Benchmark, International, who walked us through every step and helped us to stay on task to the very end.”

Benchmark International’s Senior Associate, J.P. Santos, commented “The Benchmark International team is very happy for John Jackson, Bob Galloway and the entire Jackson Galloway Associates team.  From the outset, the shared vision in terms of design and corporate culture between Jackson Galloway Associates and FGM was apparent and was helpful in coming to equitable terms.  Both parties were collaborative in their efforts to bring this deal together and we are excited to see what the combined firms can do going forward.”

END_OF_DOCUMENT_TOKEN_TO_BE_REPLACED

Mergers and Acquisitions in the Architecture and Engineering Industry

Over the last few years the architecture and engineering industry has seen a marked increase in mergers and acquisitions activity. Since reemerging from the depths of the recession, the industry has been ripe with activity; with everything from the expansion of the ever growing reach of firms like DLR, Perkins & Will, and HOK, to the merging of small businesses to facilitate the retirement goals of local industry experts. Considering there is typically a few year lag between economic fluctuations and corresponding changes in M&A activity, as the bull market run is approaching nine years, this type of inorganic growth activity shows no signs of slowing down.

As an industry agnostic mergers and acquisition leader, Benchmark International is in touch with leaders from a variety of industries on a daily basis. We’ve seen significant movement from corporate development teams in a number of industries which are beginning to expand their services to grow not only their customer base, but also to gain additional wallet share of their existing clients. This type of cross pollination has occurred in interior design, surveying, construction, architecture, engineering, and technology. We currently are in the midst of closing a transaction which would allow a specialized electrical engineer which focuses on the commercial and healthcare markets to broaden their end market to include the hospitality sector, and their service offerings to include the upstream design, planning, and engineering components of a building’s IT infrastructure needs.

END_OF_DOCUMENT_TOKEN_TO_BE_REPLACED

Austin, Texas Proves to be an Engineering Hotspot 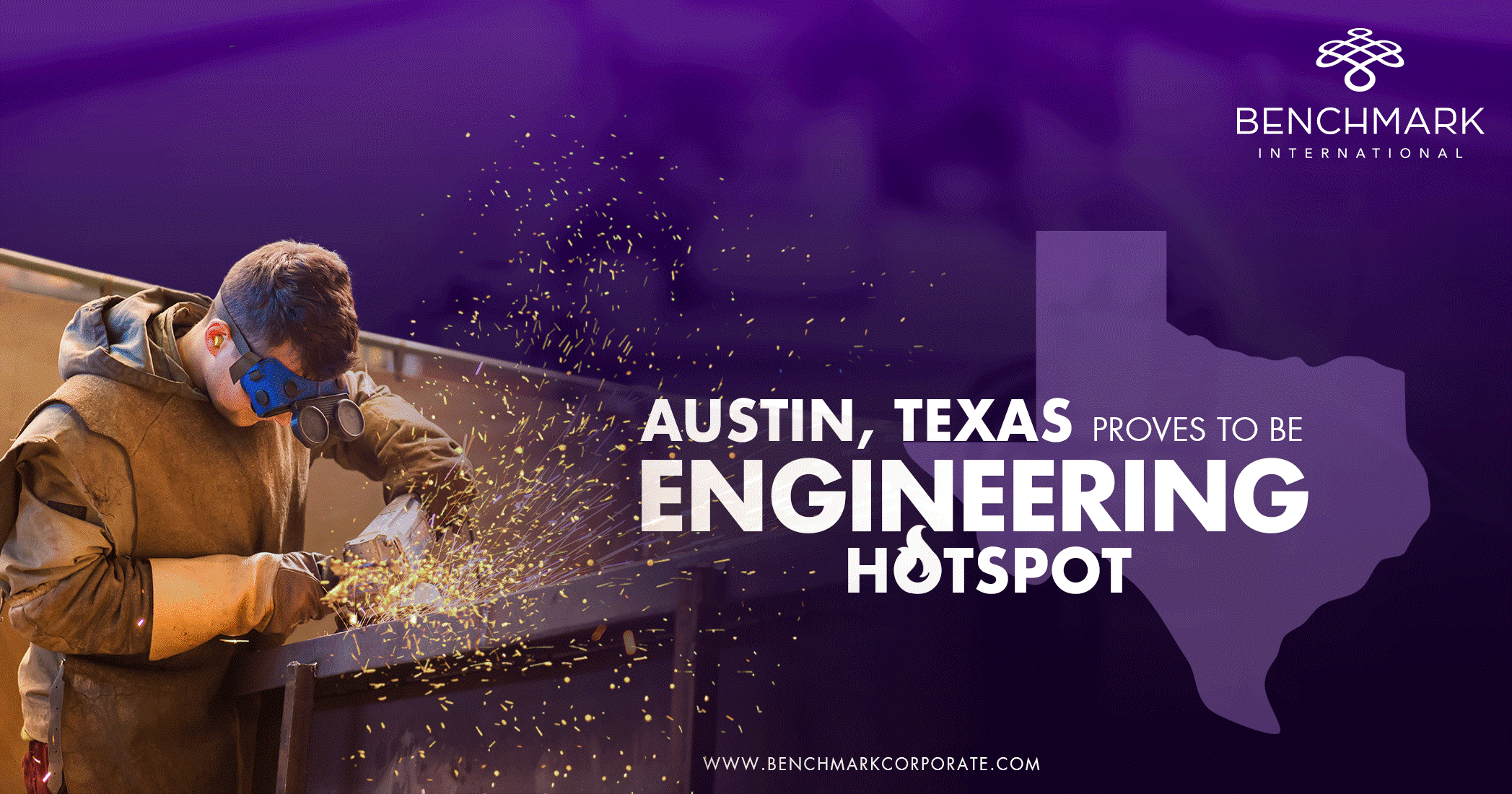 We’ve all heard it, the best measurement of a city’s growth is the number of cranes and projects going up. We’ve all heard buzzwords about Austin, TX being an “IT” city, but it’s not just Austin that is sprawling with new developments and high-rises. Stop and think about this type of buzzing activity throughout a 70 mile stretch from San Antonio, the home of the Alamo, to Austin-Roundrock. This, my friends, is the I-35 corridor, a stretch of interstate highway that connects San Antonio, San Marcos, Austin and Dallas. Almost everyone has benefited one way or another from the massive growth happening in the region. Better jobs, more activities for the young professionals, and an overall increased quality of life. The growth in the region has, of course, brought upon Central Texas its unique set of challenges that one does not think of
right away.

No, it is not practically unaffordable real estate and rent. The biggest challenge lies in making these interconnected cities feel like home 24/7. Going home sure in the knowledge that the roads will be safe, our lights will turn on, and that water will flow when we take a shower after a long jog in Town Lake (Lady Bird Lake for you non-Austinites).

With the increased growth in population over last decade, the Central Texas region, that is known as the i-35 Corridor, has experienced its unique set of challenges. While home builders and apartment complexes make fortunes from overpriced property values, there is an unsung hero behind the scenes: the engineers who make all this growth possible. As mentioned previously, everyone expects their roads to be safe, their lights to turn on, and their water to run. In Texas, these are all major engineering feats. No, we’re not just flatland sitting on enormous oil and gas reserves. Central Texas is home to the Hill Country, one of nature’s gifts to the world; and as its name implies, it has plenty of hills.

So, how does one exactly get water to flow up the hill? Well, we didn’t know the answer either, and quite frankly, we still don’t, but some of the Benchmark International teammates live on top of hills. So, not having water up there would be a problem. Engineering firms in Texas have long solved problems before the growth spurt in Central Texas. The Colorado River dam for example, or the Houston Port.