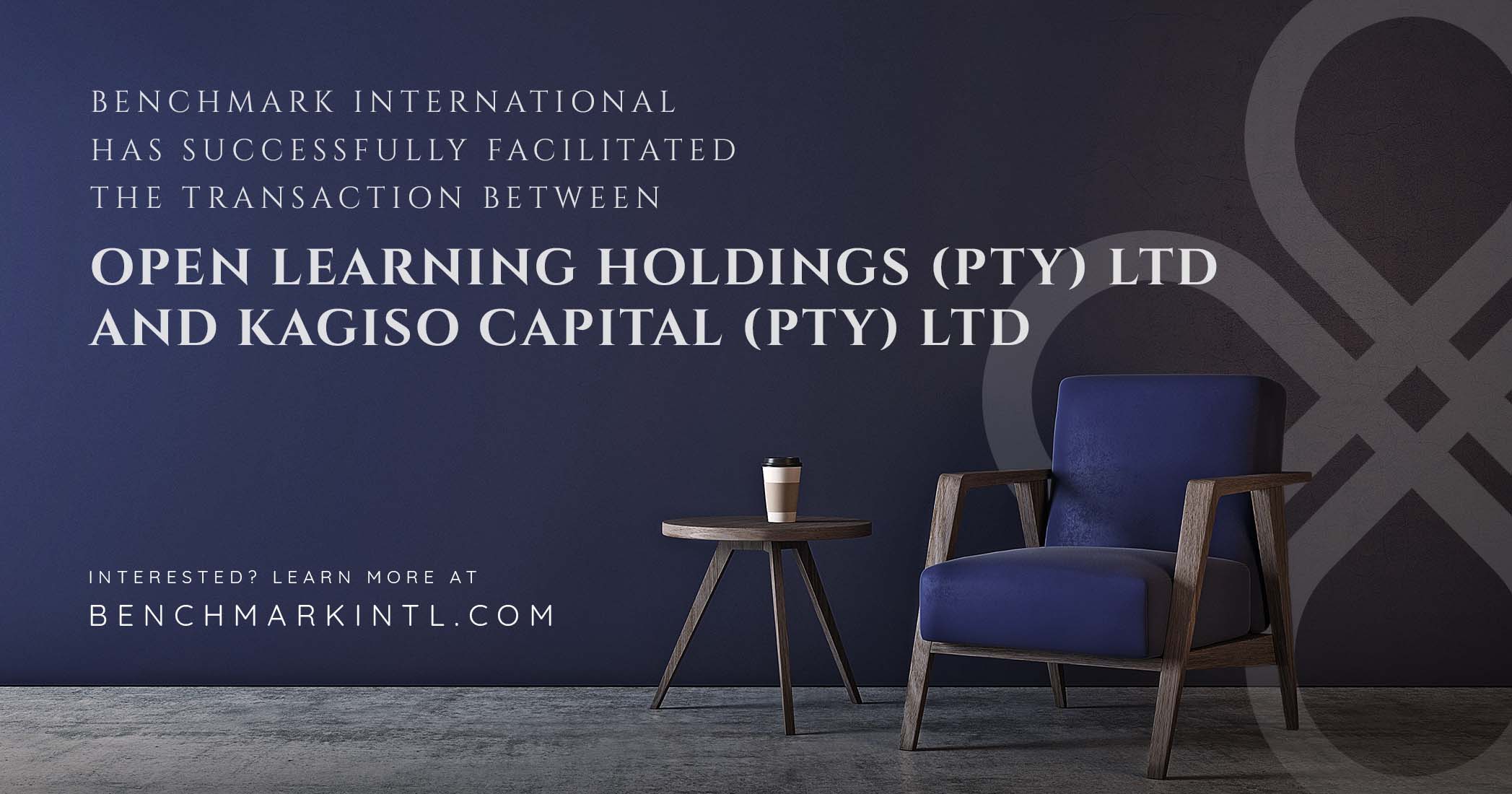 Benchmark International is pleased to have advised Open Learning Holdings on the sale of their wholly-owned subsidiary, the Open Learning Group (Pty) Ltd, to Kagiso Capital (Pty) Ltd.

Open Learning Group (Pty) Ltd (OLG) is a private Higher Education institution specialising in distance learning educational programmes. Considered as the most affordable, effective , and flexible vehicle to achieve further education, distance learning opportunities are in high demand by both students and corporates wishing to upskill their staff. Higher Education and Training (HET) programmes offered by OLG range from NQF Level 2 to NQF Level 7, providing an extensive pipeline of programmes for students committed to bettering themselves and their career opportunities.

OLG and their subsidiary Business School of Excellence (Pty) Ltd also offer Technical Vocational and Educational Training (TVET) courses through learnerships, providing knowledge and skills for employment in a specific sector. These, together with Further Education and Training (FET) short learning certificate programmes, are offered in a blended approach, including distance learning, online learning, and contact sessions.

Lebogang Mosiane, the Chairman of OLG, commented on the transaction, saying, “Kagiso Trust since 1985 has invested in education, primarily being driven by its mission to eradicate poverty. Acquiring Open learning group simply provides a higher education articulation path curated for the needs of those who need the necessary skills to be active in the economy ”, while Jan Kitshoff added: “The acquisition of OLG by Kagiso Capital will provide them with a solid platform to expand their value offering within the broader education landscape.”

Kagiso Capital (Pty) Ltd is an investment holding company wholly owned by Kagiso Trust. The primary purpose of Kagiso Capital is to ensure the longevity of the Kagiso Trust and to diversify the investment asset base of the Trust beyond its current investments in FirstRand Limited, MMH Limited, Discovery Limited and Kagiso Tiso Holdings (Pty) Ltd. Kagiso Capital drives a diversification strategy through meaningful investment in innovative and growing businesses that are committed to economic transformation.

Lebogang Mosiane, speaking on behalf of Kagiso Capital, said, “We would like Open learning group to be the preeminent education platform, where future industries will come recruit talent that will add value to their businesses. We hope this will narrow inequality and transform South African industries to be competitive globally.”

Andre Bresler, representing Benchmark International’s South African office, added, “It was a genuine privilege to be selected to advise the shareholders of Open Learning Holdings (which includes institutional shareholder Old Mutual Life Assurance Company (SA) Ltd) on this transaction, the professionalism and attention to detail was outstanding throughout the process. We are delighted with the outcome for all parties and wish continued success as they embark on this exciting new chapter.”

END_OF_DOCUMENT_TOKEN_TO_BE_REPLACED 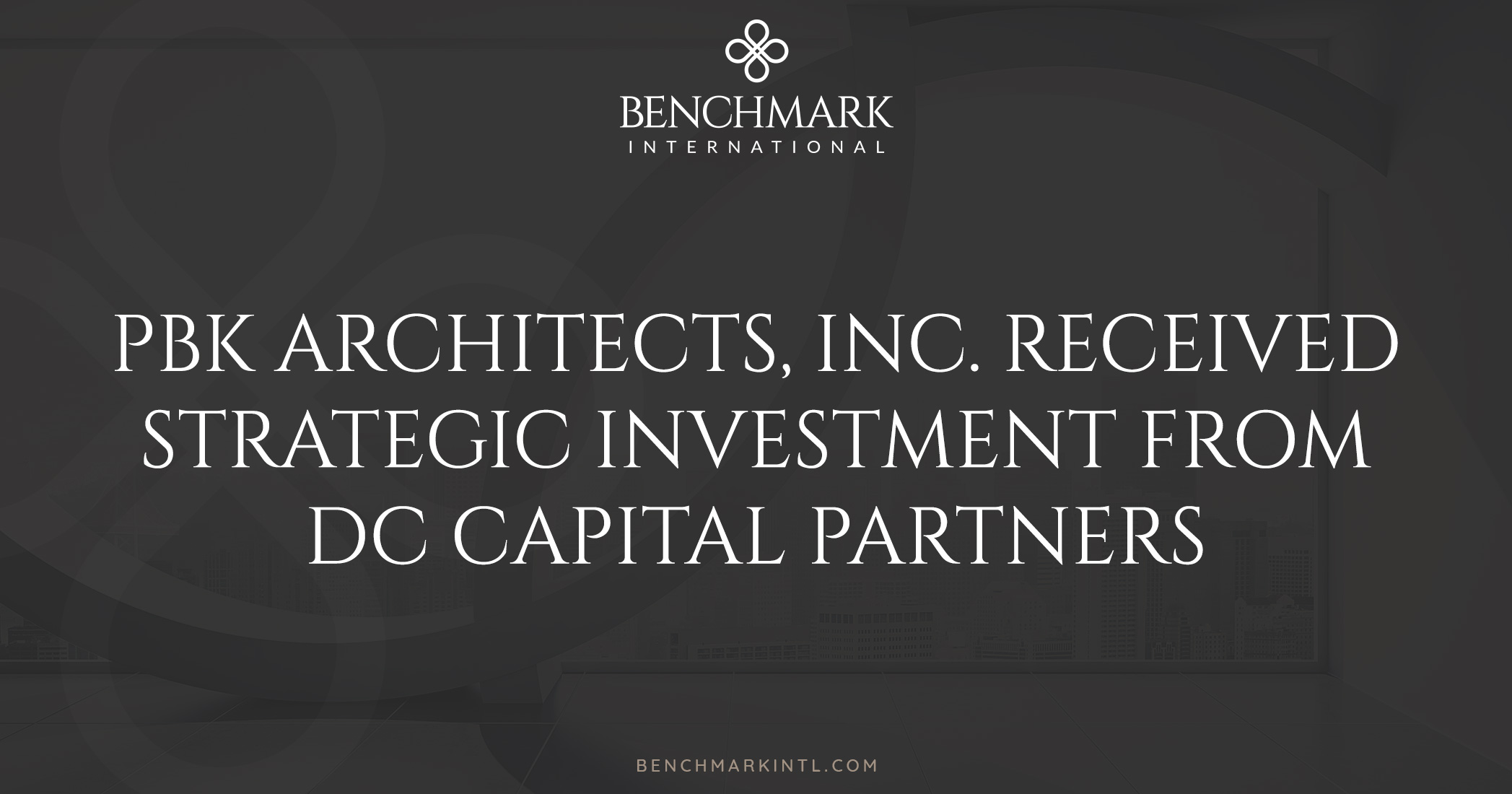 Benchmark International is pleased to announce the successful closing of DC Capital Partners’ investment in PBK Architects, Inc., and its subsidiaries. As the 23rd largest US-based architecture firm, PBK, based in Houston, Texas, and its subsidiaries in California, Beijing, Shenzhen, and Hong Kong employ over 500 architects, engineers, and related professionals.

“We are pleased that we were able to introduce PBK’s owners to the right partner, one who not only recognized the value and potential in the business but also saw the wisdom of leaving its management, best-practices, and award-winning culture in place; our clients' three most important criterion for taking this step,” said Dara Shareef, one of Benchmark International’s two Managing Directors on the transaction.

In addition to its Top 25 status, in 2019 PBK was ranked as the “#1 Education Design Firm” by Engineering News-Record (“ENR”), widely regarded as the engineering and design industry’s premier publication. Specializing in K-12 projects and, in particular, large public high schools, PBK has long been the go-to firm for sustainable design and next-gen integrations in particular. The company also focuses on two related building types - higher education and sports facilities.

DC Capital Partners was familiar with PBK’s government focus, already having made similar investments in architecture firms, AMA and Pond & Co., both of whom work predominantly with US federal government clients.  “Moving into the local government market was not a big step for DC Capital but one they appear to have not explored previously. When Benchmark International first contacted them with the opportunity, the timing was not right given their other ongoing projects at that point. Benchmark’s diligence and perseverance in circling back proved to be a key factor in achieving this successful result,” said Benchmark International Associate Jesse Crawford-Lang.

“In our industry representing government contractors is often seen as a niche specialty. Though we are sector agnostic, we end up closing deals for more government contractors each year than do most boutiques specializing in the field. A great business is a great business and PBK is a great business,” said, Clinton Johnston Benchmark International’s other Managing Director on the transaction.  This transaction follows closely on the heels of 11 other Benchmark International deals closed in the AEC space in the first half of 2020.

Closing a deal in the midst of COVID, particularly one with the unique international implication present here, was not without challenges, however. The deal was agreed in principle just before lockdowns began across the country. Despite the turmoil in the markets, both sides were able to hold up their end of the originally agreed bargain though not without a bit of mutually beneficial maneuvering. PBK Founder and Executive Chairman Dan Boggio commented, “Benchmark, along with our legal team at Nelson Mullins and our accounting team at Weaver, just kept plugging away no matter what was going on outside the deal. The number of issues that needed to be addressed, negotiated, and implemented in a deal like this was apparently endless. The ways that we and DC Capital had to come together to address some unprecedented events precipitated by the pandemic and the creative solutions our team generated were absolutely amazing.  My partners and I are so glad that we had the opportunity to work with this great team. I don’t know that this would have gotten done, even in regular times much less the first half of 2020, without them.”

PBK’s efforts were led internally by CO-CEO and COO Chris Cunico. He added, “We really appreciated the way Benchmark led us through this process. All the decisions were ours to make. They continuously provided the data, inputs, and experienced insights that set us up to make the best possible decisions throughout the relationship. They were patient with us when we wanted to move slowly and led the charge whenever we wanted to move ahead aggressively.”

DC Capital was assisted on the transaction by Arnold & Porter, Ernst & Young, and Aon Advisory. “When DC Capital comes to town, they bring the big guns. It was a pleasure to stand toe-to-toe as adversaries to negotiate and structure the best deal possible for both sides while never compromising on our clients’ list of non-negotiable issues. We like to test our mettle, and that’s what happened here.  In the end, this is the deal we were asked to get for our clients, and we are happy to have delivered for all 16 of them,” added Benchmark International Associate Director Deidre Ryan.

END_OF_DOCUMENT_TOKEN_TO_BE_REPLACED 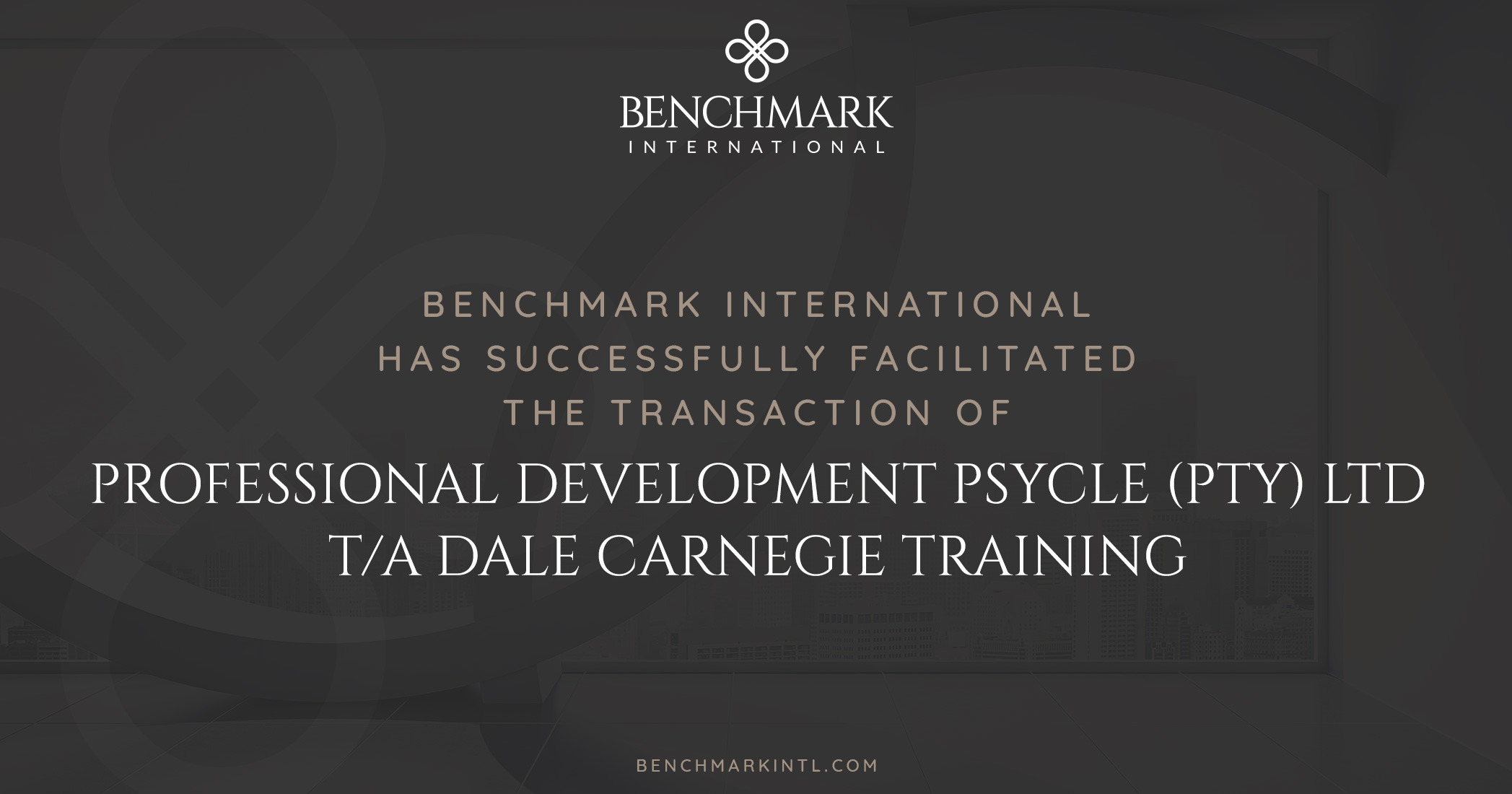 Dale Carnegie & Associates is a global training organisation established in the USA in 1912 by the company’s namesake Mr. Dale Carnegie; a prolific author and public speaker, widely considered to be the greatest pioneer of the self-development field. The company now operates as a franchise in over 76 countries around the world.

Our client, Professional Development Psycle (PTY) LTD & Professional Development Psycle KZN (PTY) LTD t/a Dale Carnegie Training are a Southern African franchisee, offering Dale Carnegie certified training to a blue-chip client base. At its core, the company gives individuals the critical skills needed to live, lead, sell and present successfully. In so doing, these individuals take command of their personal and work lives and are more intentional in how they influence relationships, becoming more effective at home and work.

The buyer is a private equity company with a strong focus on transformation through social up lifting, including education and training. Dale Carnegie’s effective training methodology underpins the dynamic South African training team which will continue to form part of the company’s ongoing success.

The CEO of Dale Carnegie Training Gauteng & Kwa-Zulu Natal, Mr. Neville De Lucia said, “With zero experience in buying or selling businesses, it was nice to know that there was someone in my corner that could give me guidance. Being in the soft skills business, I tend to emphasise the personal side of the relationship. This is great if it serves you, but not so good if the hard data is what needs to be emphasised. Benchmark guided us on how to leverage the softer issues and coached us on the harder, more data driven decisions that needed to be made. This was overall a win-win engagement. The transition process is more meaningful between us as incumbents and the new owners as a result of how the negotiations had taken place between the parties involved.”

Benchmark International Transaction Director, Johann Haasbroek commented, “The deal concluded represents a great result for our client. Not only have we secured a private equity buyer that has a vested interest and passion for people training and transformation space ,but at the same time provided the client with an exit strategy that enables them to take up a new international opportunity within the same franchise group of companies.”

END_OF_DOCUMENT_TOKEN_TO_BE_REPLACED 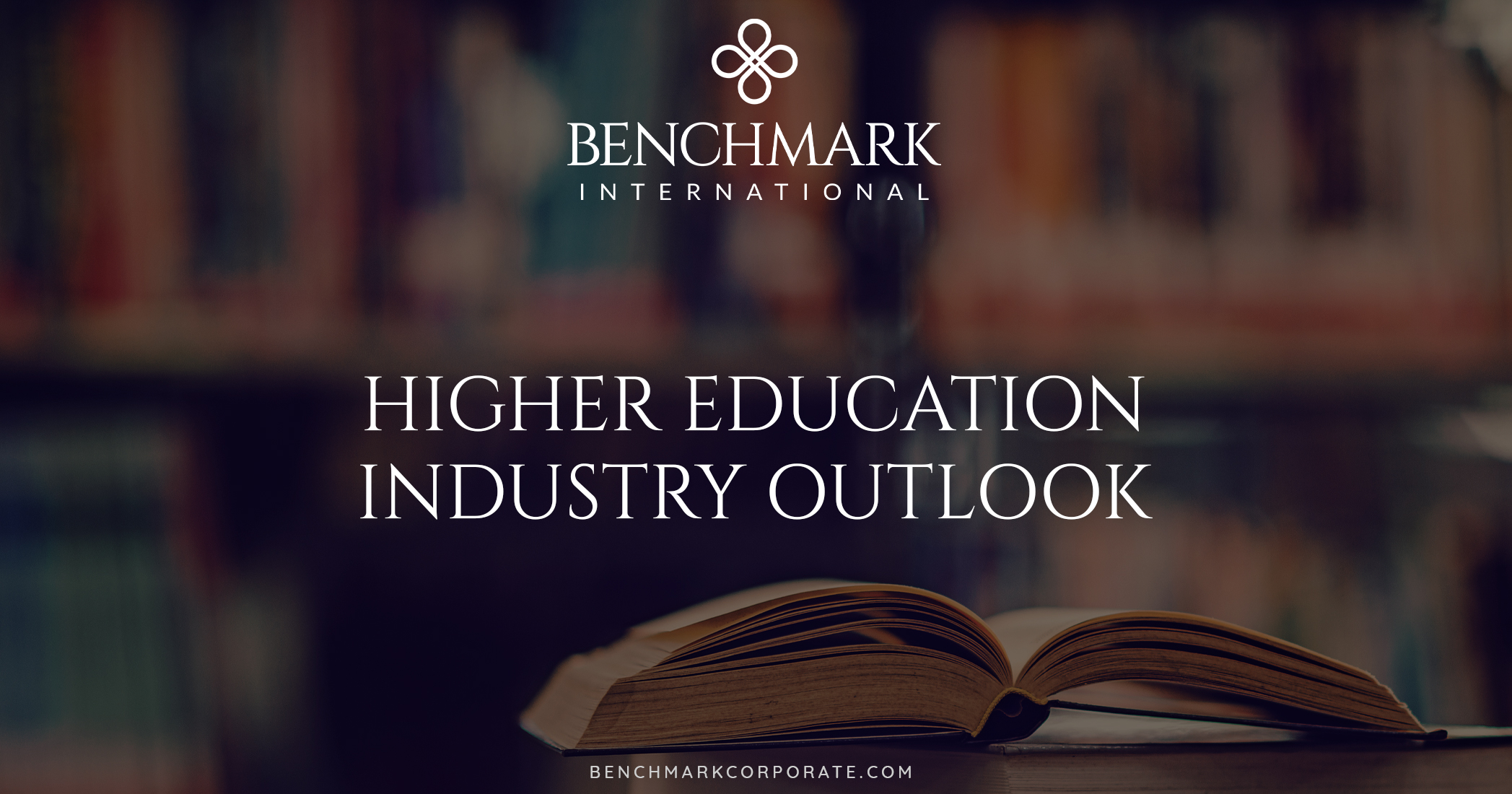 Through the year 2023, the global higher education market is expected to grow at a compound annual growth rate of more than 12%. There are several factors driving positive growth in this sector, from the high demand for technological innovations to the surge of internationalization.